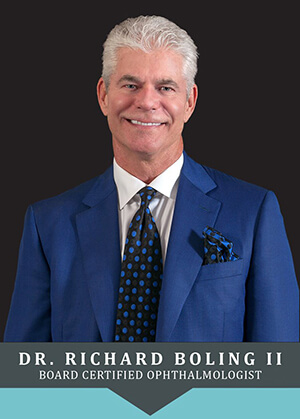 Ophthalmologist in Elkhart and Goshen

Dr. Richard C. Boling II is an Elkhart, Indiana native, where he attended Elkhart High School prior to graduating as one of the first Elkhart Memorial classes in 1974. A life-long athlete, Dr. Boling II excelled in football and basketball throughout high school and college.

Dr. Richard C. Boling II joined his father in the family practice in 1986 where together they have provided state-of-the-art eye care to Michiana families for 60 years.

Dr. Boling II was the first in Michiana to perform No needle, No stitch, No patch cataract surgery in the area. He has performed over 25,000 cataract procedures. He was the first to bring refractive surgery to Michiana when he started performing radial keratotomy in 1990. In 1995, he became the first surgeon in the area to perform PRK, laser vision correction. He continued to be a pioneer as an Investigator in two FDA clinical studies researching LASIK protocols. To date, he has performed well over 20,000 LASIK procedures.

Dr. Boling II specializes in No needle No patch No stitch cataract surgery, Intralase LASIK, aesthetic surgery of the eyelids and the management of glaucoma, diabetic retinopathy and macular degenerative eye disease. He also provides routine eyecare for all ages.

Dr. Boling II received the Indiana Academy of Ophthalmology Humanitarian of the Year award in 2011 as well as the Indiana State Medical Association Physician Community Service Award in 2012.

Dr. Boling II resides in Elkhart with his wife of over 35 years, Babette, and their 5 daughters: Ashley, Whitney, Hayley, Mackenzie and Ronisha. He enjoys spending time with his grandchildren, Ryan James, Lyla Grace, Noah and Brielle!

I’m surrounding myself with the best people, state-of-the-art equipment, one-of-a-kind facilities, and a sincere love for my profession and community. I am able to enjoy the opportunity of serving others on a daily basis by enhancing and protecting the precious sense of sight. It is truly a honor and privilege to care for you and your loved ones.

Dr. Boling II feels like he has an “honorary ovary” from living with six women for so long.

Eye Doctor in Elkhart and Goshen, IN